The Creed of Freedom

There is nothing more common in history than for oppressed people to rise up against their masters and, at great cost in treasure and blood, throw off the old regime, only to discover that they have replaced it with one that is just as bad or worse. That is because it is easy to know what we dislike about a political system but not so easy to agree on what would be better.

For most of history, it has been the habit of men to focus on personalities rather than principles. They have thought that the problem was with the man who rules, not with the system that sustains him. So, they merely replace one despot for another, thinking that, somehow, the new one will be more wise and benevolent.

Even if the new ruler has good intentions, he may be corrupted by the temptations of power and, in those rare cases where he is not, eventually he is replaced by another who is not as self-restrained. As long as the system allows it, it is just a matter of time before a new despot will rise to power. To prevent that, it is necessary to focus on the system itself, not personalities and, for that to happen, it is just as important to know what we are for as it is to know what we oppose.

Even today, with so much talk about fighting to defend freedom, who can define what that word means? For some, freedom means merely not being in jail.

statement of principles that leaves no room for misunder-standing; a creed that everyone of good faith toward their fellow human beings can accept with clarity of mind and strength of resolve. There is an old saying that if you don’t stand for something, you’ll fall for anything.

The Creed of Freedom that you are about to read is the rock-solid ground that will allow us to stand firm against all the political nostrums of our day and those in the future as well. The Creed expresses the core ideology that binds all members together.
This is not like the platform of a political party that typically is a position statement on a long list of specific issues and which changes from year to year to accommodate the shifting winds of popular opinion. Instead, it is stated in terms of broad principles that do not change over time and that are not focused on specific issues at all.

If these principles are followed, most of the vexing political and social issues of the day can be resolved in confidence that the resulting action will be consistent with compassion, justice, and freedom.

Although I authored The Creed, I cannot claim credit for it. All of the concepts are taken from the

great thinkers and writers of the past. My role has been merely to read the literature, sort the concepts into categories, and condense them into summary statements.

When you read the Creed, please be mindful that it is an abstract of an essay that is published elsewhere on this site.

The depth of the Creed cannot be fully appreciated without the explanations, definitions, and arguments that support it.
Although The Creed appears here first, it is recommended that, after reading it, you follow the link, below, (and at the end of this section) that takes you to the essay, entitled The Chasm.

The Creed of Freedom

1. INTRINSIC NATURE OF RIGHTS
I believe that only individuals have rights, not the collective group; that these rights are intrinsic to each individual, not granted by the state; for if the state has the power to grant them, it also has the power to deny them, and that is incompatible with personal liberty.
I believe that a just state derives its power solely from its citizens. Therefore, the state must never presume to do anything beyond what individual citizens also have the right to do. Otherwise, the state is a power unto itself and becomes the master instead of the servant of society.
2. SUPREMACY OF THE INDIVIDUAL
I believe that one of the greatest threats to freedom is to allow any group, no matter its numeric superiority, to deny the rights of the minority; and that one of the primary functions of a just state is to protect each individual from the greed and passion of the majority.
3. FREEDOM OF CHOICE
I believe that desirable social and economic objectives are better achieved by voluntary action than by coercion of law. I believe that social tranquility and brotherhood are better achieved by tolerance, persuasion, and the power of good example than by coercion of law. I believe that those in need are better served by charity, which is the giving of one’s own money, than by welfare, which is the giving of other people’s money through coercion of law.
4. PROPERTY RIGHTS = HUMAN RIGHTS
I believe that the human instinct for private property is a positive force because it provides an incentive for production, which is necessary for the material support of mankind. It justly rewards those who use resources wisely and punishes those who abuse them. Those without property must depend on others for survival, and those who depend on the state must serve the state. Therefore, private property is a human right, essential for prosperity, justice, and freedom.

5. MONEY WITHOUT COERCION
I believe in freedom to accept or reject any currency, or other forms of money, based entirely upon my personal judgment of its value, because a monopoly over the issuance of money and the power to force others to accept it leads to corruption, inflation, and legalized plunder.
6. EQUALITY UNDER LAW
I believe that all citizens should be equal under law, regardless of their national origin, race, religion, gender, education, economic status, life style, or political opinion. Likewise, no class should be given preferential treatment, regardless of the merit or popularity of its cause. To favor one class over another is not equality under law.
7. THE GREAT LEADER
I believe that leadership is a natural outgrowth of human dynamics and is essential for social order and large-scale tasks. However, there are two types of leadership. One is based on coercion and decree, found in military organizations and totalitarian political systems. The other is based on persuasion and good example, found in voluntary organizations and free political systems. We must evaluate leaders, not only on their stated goals, but on which type of leadership they offer. Their goals may be admirable, but how they pursue those goals may be tyranny. All modern totalitarian systems have a “great leader” who claims to represent the best interests of the people but who is, in reality, merely a dictator. Truly great political leaders do not follow that path.
8. PROPER ROLE OF THE STATE
I believe that the proper role of the state is negative, not positive; defensive, not aggressive. It is to protect, not to provide; for if the state is granted the power to provide for some, it must also be able to take from others, and that always leads to legalized plunder and loss of freedom. If the state is powerful enough to give us everything we want, it also will be powerful enough to take from us everything we have. Therefore, the proper function of the state is to protect the lives, liberty, and property of its citizens, nothing more. That state is best which governs least.

In day-to-day application, The Creed of Freedom can be reduced to just three simple rules. We call them the …

INDIVIDUAL RIGHTS
Only individuals have rights, not groups. Therefore, do not sacrifice the rights of any individual or minority for the alleged rights of groups.

EQUALITY UNDER LAW
To favor one class of citizens over others is not equality under law. Therefore, do not endorse any law that does not apply to all citizens equally.

DEFENSE ONLY
The proper function of the state is to protect, not to provide. Therefore, do not approve coercion for any purpose except to protect human life, liberty, or property. (This is the principle of non-aggression.) 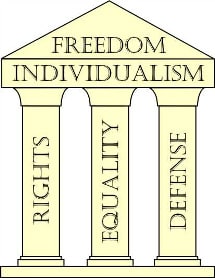 Another way of viewing these principles is to consider them as the three pillars of freedom. They are concepts that underlie the ideology of individualism, and individualism is the indispensable foundation of freedom.For the rational and historical support for The Creed of Freedom, see The Chasm.